Grilling Season Is In Full Swing 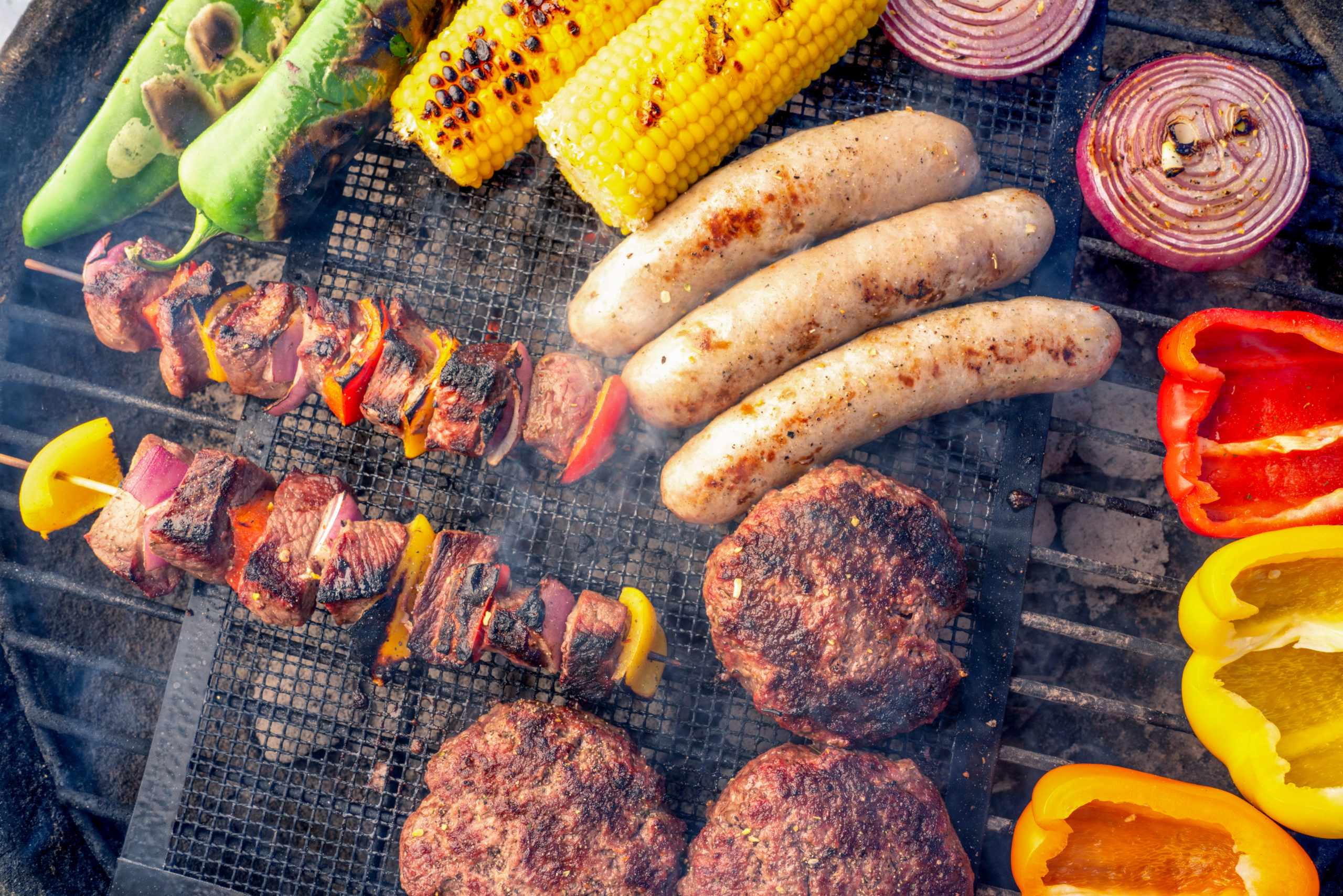 By being outside, the cooking of food doesn’t heat up the indoor areas when AC may already be doing its best to keep us cool.

Grilling can be fast, efficient, and, best of all, delicious!

Let me take a moment for some definitions.  I consider outdoor grilling to be utilizing a heat source to cook over a grate.  It could be charcoal, propane, or natural gas; some could even consider any of these forms as barbeque (BBQ).  I lack the ability to look further into these definitions, or more succinctly said, I’d rather be grilling than researching.  I’m not talking about long braising, smoking, or anything that takes more than about 30 mins to cook.  That’s a different subject in my book.

I like keeping things simple.  I’m a dad of two lovely adventurous kids, and in the summer, it is work for my wife and me, and camp, sports, swimming for them, so our time together is precious.  That, and it really doesn’t need to be difficult or time-consuming to be delicious.

Keep it clean.  A clean grill is a happy grill.  Fewer flare-ups, more even cooking, and no cross-contaminating tastes and smells.  I use a wooden grill scraper before and after each use, plus I will scrub down the grates about once or twice a week with a scouring pad.  I use a natural gas grill, so I also keep the inside of the grill pretty clean by scaping and brushing everything, including the heating elements, when needed.

I never sauce such a thing.  It might be one of the more controversial claims I make, but with very few exceptions, sauces have no business on my grill.  Yes, that includes bbq sauce!  Why?  A few reasons: it tends to drip away from the food into the grill, it usually contains a great deal of sugar and other things that burn quite easily, and burnt is generally not tasty, and as a simple person with simple needs, I honestly like the option of having the great taste of simply grilled foods standing on their own (with a kiss of salt).  Sauces can be added to each person’s desire after the cooking process.

Added flavor.  Again, call me crazy, but the only thing I add to my grillables is salt and oil.  Oil helps with the cooking process as well as to address sticking.  Salt in various forms and from a variety of origins is the only other thing I use.  It doesn’t burn, it can assist in the cooking process, and it invigorates the flavors!  If you are on a salt restrictive diet, skip that part or add your substitute.

Go ahead and lose your temp.  I’m talking about letting proteins come to room temp prior to cooking.  This will actually make the cooking process more uniform and easier to gauge doneness.  This is especially important with thicker cuts of proteins.  However, you need to do this safely and properly.  Leaving a thick cut of fish on a counter for an hour or two is not wise for a variety of reasons, so there are different rules for different types of proteins.  A steak out on the counter for an hour or two is fine. Chicken and pork have a bit less time on the counter and fish even less.  Obviously, the thicker the cut, the more time to room temp, and coming to that temp from frozen takes even more time.  By the way, this doesn’t mean I’m above pulling a frozen burger out and slapping it on the grill, but if given the option, an hour or two to come to room temp is preferable.

I love a steak in uniform.  Uniformity is a great pillar to cooking evenly and having everything done at the same time.  Purchase steaks as close to the same size and uniform thickness as you can, or you will have to stagger start and stop times.  If you have one chicken breast that is much fuller than the other, you can butterfly it (slice nearly in half, but leaving connected then opened up). Letting your proteins rest and fully cook through is important.  If you cut into a steak while on the grill or right after taking it off, a lot of those juicy juices will just drip away.  Let them rest for about 10 minutes.  Covered.  I just use a domed lid from a large pot over the plate.

I’ve talked a lot about grilling animal proteins, but honestly, I grill a lot of vegetables and occasional fruits.

As I mentioned earlier, salt and oil are pretty much all the preparation I use.  If it’s meat that I’m cooking, I salt and oil (after it has come to room temp) AND THEN fire up the grill allowing the salt to do some magic and dissolve into the protein.  About 15 to 30 minutes.  Generally, I use olive oil (not extra virgin, just plain olive oil), canola oil (because where I grew up, we grew a lot of canola!), or some other high smoke point oil.  As far as salt, I generally use flaky kosher salt.  The flat crystals dissolve and absorb more readily than the standard crystals.  I also use sea salt as well as pink Himalayan, or another fancy kind.

Some like it hot!  With very few exceptions, I start with a lava hot grill and back it off, depending on what I’m cooking.  It gives you those instant grill marks, sears the protein to retain moisture, and adds flavor.

Twist and flip.  Don’t press the juice out of burgers, steaks, or breasts. If you’ve properly seasoned and oiled your grillables and kept your grill clean, you will know when to flip something when it easily releases from the grill.  Ok…there’s more to it than that, but it is one of a few good indicators to use.  For steaks, burgers, and a lot of veggies, I will grill for a min or three, give it a ¼ turn grill for a few more, then flip and repeat.  This will give you lovely grill marks.

The usual grillables in my family…

Onions (especially Vidalia or sweet onions).  Sliced about ¾ inch slices like you would with onion rings lateral to the root, salted with kosher salt, and drizzled with oil.  I might poke a few toothpicks in to keep them together, but usually, just roll the dice and go for it.

Squash eggplant and zucchini.  Young ones are best.  If they are about the size of a bratwurst, I’ll cut them in half lengthwise.  Any larger, and I slice a few more times lengthwise.  For really big ones, I’ll slice into rounds.

Chicken (sometimes spatchcock, breasts, wings, or pieces).  I usually buy whole chickens and break them down myself…unless I’m in a hurry.  Then it’s skinless, boneless breasts.  When I pull them off the grill, I will put them overtop a bed of garden-fresh thyme or other herbs then cover to let them rest, thus infusing them with a fantastic aroma.

Burgers, brats, and dogs.  I did mention I’m a father, right?

Corn.  On the cob and in the husk.  I pretty much burn the husk, which leaves the corn infused with a smoky flavor.  My wife doesn’t like the burned husk, so I adjust.  I also will husk the corn and throw it right on as well, rolling it on occasion until the kernels are just slightly caramelized.

Tofu.  Extra-firm.  Cut into squares and water pressed out.  Yes, I even have a tofu press.  It’s awesome.  Eat it like a weird steak with steak sauce, kimchi, bbq sauce, or soy sauce.

Wild game and bison.  Usually, a lot less fat in these, so it is a fine line between done and dry/tough.

Turkey steaks.  Get a whole boneless turkey breast and cut it into steaks across the grain.  One of my faves, especially when topped with kimchi.

Cabbage.  Yup.  Cut into wedges (keeping a bit of the root on each wedge to keep it intact) salt and brush with oil.  Dress with some blue cheese crumbles and bacon.  Heck, maybe even ahead of lettuce with similar prep.  The wife can’t eat dairy, so I dress with balsamic vinegar and goat cheese.

Fish.  I mainly stay with sustainably caught wild fish. Salmon is easy with the right tools; flaky fish like cod, Mahi Mahi, or our local walleye is a bit more challenging.  I may even bring out a cast iron pan to cook those or wrap in banana leaves.  I avoid swordfish, marlin, and sharks for a variety of reasons.

What don’t I grill?  Bacon.  Too greasy and would likely just burn and flare.  I also don’t grill anything in aluminum foil.

Well…that gets you started.  When is it done, how to serve, what to serve alongside, will have to wait for another installment.